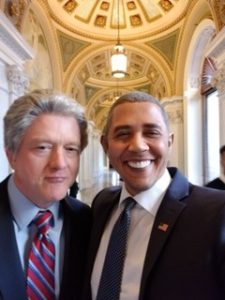 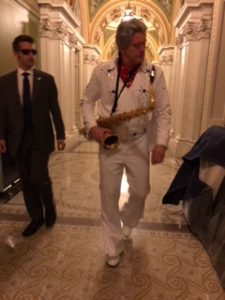 Bob David as Bill Clinton along with the talented Reggie Brown as Barack Obama performed as co-emcees at the Library of Congress in D.C. to entertain Zaxby’s Franchise Owners. Imagine the intrigue when Bill is suddenly missing then out of nowhere the crowd erupts with excitement, looks of astonishment and laughter as a special surprise guest takes center stage and we meet a character known as “Belvis”! (Bob as Bill as Elvis) He sings, plays the sax  and dances among the crowd, then works the room and thrills attendees with spontaneous humor and Elvis like moves. Guests can’t help but ask for photos / selfies with “Bill” pretending to be “Elvis”. After all, when Hillary lost the election he knew he wasn’t going to be the “1st Dude” in the White House so he had to find some way to stay in the limelight right?

Special thanks to Skylark Creative Group with Entertainment Production.

“Thank you Bob for being such an amazing Bill Clinton and “Belvis”! You are fabulous and were an absolute hit!”

View all posts by billadmin →

Bob as Bill on TV’s Scandal Made Me Famous: Monica Lewinsky

Bob David's comedic impersonation of Bill Clinton will thrill and inspire the audience at any corporate event.

Bring the 42nd President to Your Event ›